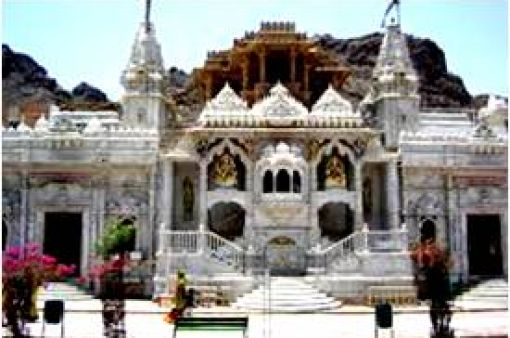 Jain temples are found all over India and are being built even at present by the votaries of this faith, but the ones that were built in Rajasthan, Madhya Pradesh and South India when Jainism was supported by the royalty, are a sight to see. By the end of the third century, Jainism had taken firm roots throughout India. It had started from Magadha and slowly spread to Kalinga, now Orissa, in the east, Mathura in the north, Mahura in the west and Deccan and Tamil Nadu in the south. Royal patronage was one contributing factor to its rapid growth. It, however, soon lost grip on the royalty in the north. But the middle classes, composed of merchants, bankers and big businessmen, continued to be its strong supporters. In the South, Jainism gained popularity and the ruling families became its votaries up to the eighth century. It continued to have its strongholds south of the Vindhyas where famous Jain Temples were built in the caves as well as on the ground. These shrines hold their own against other notable structures of that kind. The Gupta period, when there was a revival of Hinduism, saw a decline of Jainism. In Bengal and ironically in Bihar, where it had originated, it lost its hold. The Ganga Kings of Mysore were intimately associated with Jainism. It is not possible to say exactly when temples started getting built in India. Moreover, the temples of the various faiths do not have substantial differences from the architectural angle. The difference mainly lies in the deities and subsidiary data and sculpture inspired by respective branches of mythology. The Jains, however, unlike others, selected picturesque sites for their temples, paying attention to the effect of environments on architecture. Comments from a foreigner that the ideology and spirit of the Jain religion and its culture are reflected in the Jaina art and architecture, are quite appreciative of the Jaina art.

Jain temples have sculpture of very high order which depicts themes that besides being monumental, have a religious appeal and ethical import. Jaina philosophy does not believe in god being the creator, sustainer or destroyer and as such idol-worship is not catered for by this faith. But idol-worship got introduced, because the common man wanted something to concentrate upon. It is presumed that idol worship among the Jains was allowed in the belief that it was ideal-worship and not idol-worship and that the image of the Lord would arouse a longing in the minds of the devotees to emulate the lord who had lived as a human being and whose soul had reached perfection. While this might be the justification to allow the building of temples, there is no doubt that in giving this sanction, weight would have also been given to the possibility of Jains going astray and worshipping elements of a non-Jaina character. The aesthetic side of the temple was given attention gradually during its evolution. It is, however, true that the real purpose of ideal-worship in the Jain temple, is not being achieved at present, as these have become places more for social gatherings rather than for peaceful meditation. A Jain temple is neither a funeral relic nor a memorial to some Tirthankara, nor a sanctified place because a certain Tirthankara went to moksha from that particular place.

A Jain temple, therefore, had to have the main deity and cater to the requirements of an auditorium. In this small article, it is not possible to deal with all the Jain temples in India, but it should suffice to describe the structural and other norms which must be adhered to. It is intended to give a detailed view of certain temples which have stood as landmarks in the annals of the Jain community in India. It is not intended to undermine the importance of other temples as they have their own importance, but the ones dealt with here are outstanding with respect to art, beauty and rare workmanship exhibited by the artists of this country. Jain Temples in Rajasthan The Jain faith gained ascendency in Rajasthan and from 8th to 10th century A. D. It had its hold on the royalty as well as the people in general, especially in the regions of Shirmal, Jalore, Osia, Chittoor and Mount Abu.