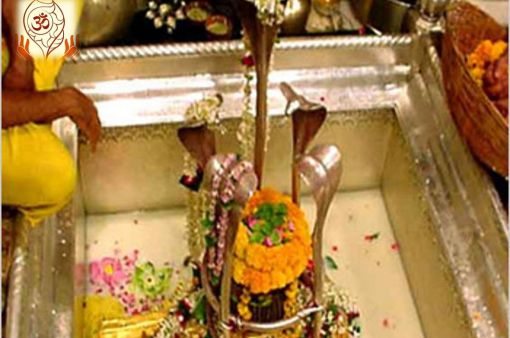 It is located amidst the crowded lanes in the holy city of Varanasi also known as Kashi and Benares. The Vishwanath Temple enshrines one of the Dwaadash Jyotirlingam of Lord Shiva and is one of the most revered pilgrimage sites for Hindus. It is believed that Varanasi is the point at which the first Jyotirlinga, the fiery pillar of lightby which Shiva manifested his supremacy over other gods, broke through the earth’s crust and flared towards the heavens. More than the Ghats and even the Ganga, the Shivalinga installed in the temple remain the devotional focus of Varanasi. Millions of pilgrims converge here to perform an abhishekam to the sacred Jyotirlingam with sacred water of river Ganga.

1. Also famous by the name of Shiv Vishwanath Kashi, Shri Vishweshwar Temple is said to be dear to Lord Shiva.

2. Hindus believe that those who come and die here attain liberation. It is said that Lord Shiva gives the Tarak Mantra to the ones who are going to die here.

3. Some also believe that the Lord resides here and is the giver of liberation and happiness.

4. Theone who prays and worships Vishweshwar with devotion attains all his desires and one who incessantly recites his name attains all siddhis and finally gets liberated.

Shri Vishwanatha Temple is situated amidst the crowded lanes of Varanasi on the banks of the rive Ganga.The templecan be approached from a lane called Vishwanatha lane. Beside its religious significance, the temple is also anarchitectural marvel.The magnificent edifice offers a breathtaking view to the onlooker.The Kashi Vishwanath Templeis also popularly known as the ‘Golden Temple’ due the gold plating done on its 15.5-meter high spire. One tonne ofgold donated by Maharaja Ranjit Singh has been used in the gold plating of the spire.Inside the courtyard is the temple of Vishwanatha surrounded by many subsidiary shrines. A well, called Jnana Vapi i.e.‘wisdom well’ located to the north of the main temple.The Vishwanatha temple consists of a mandapa and a sanctum.Inside the sanctum a linga is set into the center of the floor in a square silver altar. The Linga is of black stone.Thoughthe interior of the temple is not large and elaborate it presents the peaceful atmosphere ideal for worship.

The famous Vishwanath Temple has been rebuilt several times. The original was supposed to have been built in 1490.However, the original Jyotirlinga of Kashi Vishwanath is a not available. The old temple was destroyed as a result of theMughal invasion and Aurangazeb built a mosque in place of it.The ancient idol of Vishweshwar is situated in Jnana-Vapi. Even today the western wall of the mosque show the remnants of a temple which had very intricate and fine artwork on it. Both the Kashi Vishwanath and the Gyanvapi Mosque are adjacent to each other.